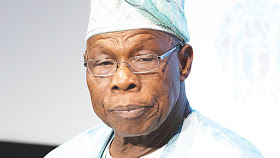 Former President Olusegun Obasanjo, has revealed why he slapped his teacher on the first day of school. According to him, the respect he has for his biological father made him do it.

Obasanjo attended the Diocese of Lagos West, Archbishop Vining Memorial Church Cathedral in Lagos, and was the special guest said that he was rejected in five different school on his first attempt to start his academic career.